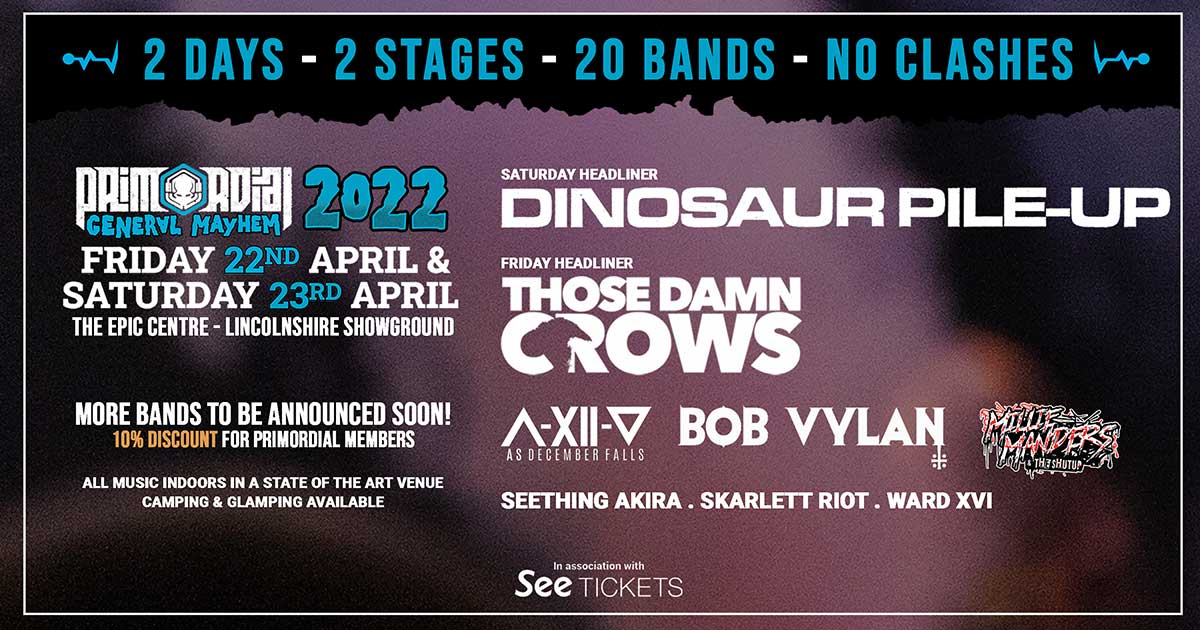 The General Mayhem 2022 is taking place on Friday 22nd and Saturday 23rd April 2022 at the Epic Centre at Lincolnshire Showground.

DINOSAUR PILE-UP is set to deliver a blistering headline set on Saturday. The band is riding high from the release of their fourth album Celebrity Mansions, performing at Download Festival and touring the US with Shinedown.

THOSE DAMN CROWS will be headlining on Friday night. They are following in the footsteps of some of the worlds most renowned rock bands. Their album ‘Point Of No Return’ stormed in to the UK national chart at #14 on its release in February 2020, with broad praise from both fans and critics.

As well as these incredible headliners, we’re delighted to announce several other additions to the line-up including London grime punks BOB VYLAN who recently completed a sold-out headline tour across the UK, rising Nottingham-based rock quartet AS DECEMBER FALLS, and Primordial Radio’s No.1 most Up-Voted artist of 2020 MILLIE MANDERS & THE SHUTUP.

Primordial Radio’s Music Director, Pete Bailey – “Holy s**t! Six months ago, we didn’t even know when shows would be happening again and now we are announcing a ridiculously stacked bill for the Primordial General Mayhem 2022.

We always knew that 2021 would be difficult to top but with the bands we’re announcing today, and more to come, we’re just getting started.

See you in April!”

Launched in 2018 as a one-day event with just three bands and then expanding to four bands in 2019 and selling out in 2020/2021 with headliners Skindred it’s been quite the ride to get to this point, 2022 will see the Primordial General Mayhem expanding to 2 days, with 20 bands across 2 stages and no clashes.

Situated inside a state-of-the-art venue at the Lincolnshire Showground inside The Epic Centre, the Primordial General Mayhem offers gig-goers from the rock & metal community a chance to experience the exhilaration of an intimate indoor gig alongside the fun and atmosphere of a festival.

With all music taking place indoors but with camping and glamping available, this is the best of both worlds!

Tickets are on sale now via See Tickets. Primordial Members receive a 10% discount but if you’re not a member you can grab a 30-day free trial (No Credit Card Needed, No Auto-Renewal)