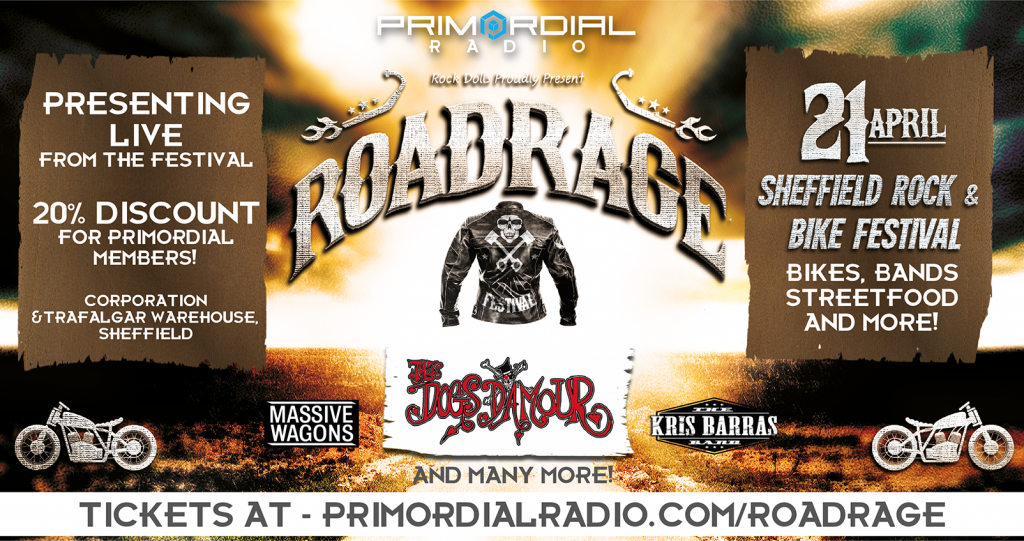 Primordial Radio has joined forces with the inaugural Roadrage Festival and will provide coverage from Sheffield’s celebration of rock and motorbikes Easter weekend with Dogs D’Amour and Massive Wagons among the superb musical line-up    The event ties in with Sheffield’s Egg Run, an annual charity ride, and will feature one of kind custom builds, a bike market and kick ass rock and roll, all of which will be indoors.

Road Rage Festival is the first indoor Rock and Bike festival in Sheffield city centre. Shake off the winter blues and head down to this multi venue experience!

On the music front, there is an outstanding line up featuring

Hugh “Moose” Evans, Primordial Radio’s CEO said “The second we heard about Roadrage we knew we had to be there.  Clearly a day of rock and bikes is of interest to our members but what really excited us was the idea and the people behind it.  They were frustrated by the way things were being done and decided to do it themselves. We get that.”

Roadrage’s organiser Shona Munro sums it up nicely, “Bands, Bikes, Blues and Rock..what’s not to like?  With a heavyweight line up of the loudest rock bands and a spectacular showcase of bikes dust off your leathers and get yourself down to Sheffield’s first ever Roadrage Festival.”

Not seeing a discount code ? Sign up to Primordial Radio, free for 30 days, and come back to this page to see discount codes for the Roadrage Festival 2019 !