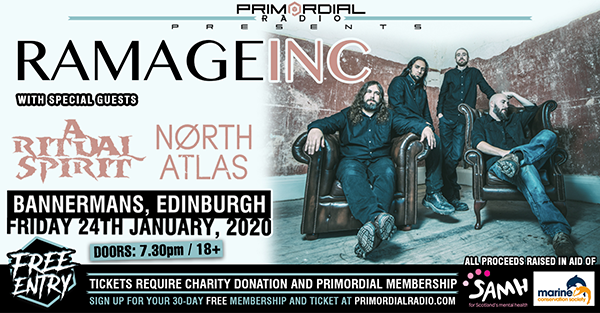 Primordial Radio is very proud to announce it will be holding the 4th Primordial Presents Live – a FREE charity show for the Scottish Association for Mental Health & The Marine Conservation Society. on Friday 24th January 2020 at Bannermans, Edinburgh

Primordial Presents live will be headlined by RAMAGE INC. , a progressive metal band from Scotland who have earned a place as one of Europe’s must-see acts.

Support will be coming from A RITUAL SPIRIT who have been playing on the UK live circuit since 2011 including slots at Bloodstock Open Air Festival, Wildfire Festival and Out of the Ashes Festival, plus numerous tours as well as  NORTH ATLAS , an alternative rock trio; the band of brothers combine their contrasting influences to defy the traditional sensibilities of a rock n’ roll band.

“This has been in the works for a little while and I couldn’t be more delighted with how the bill has come together! All three bands have been received incredibly well on the station and all bring something different to the bill, so come join us on a Friday night in Edinburgh with Ramage Inc, A Ritual Spirit and North Atlas raising money for two wonderful charities, what a night it’s gonna be!

Get your Free ticket at – Primordial Presents Live – Edinburgh

Primordial Radio is a premium rock and metal radio station free from regulation and advertising that reflects a true rock and metal environment.  In 2017, Moose, Dewsbury, Pete Bailey and Engineer Mark said, “Fuck that” and decided to flip the existing radio model on its head and successfully raised £285,000 from 1300 investors across the UK rock and metal community to launch the station which now has 1800+ members. Find out more about being a member of Primordial Radio here….

Around since 1923, SAMH is Scotland’s national mental health charity. Today, in over 60 communities we work with adults and young people providing mental health social care support, services in primary care, schools and further education, among others. These services together with our national programme work in See Me, respect me, suicide prevention and active living; inform our policy and campaign work to influence positive social change.

The Marine Conservation Society (MCS) grew from the hard work and forward-thinking of a great number of people, many of whom still actively support us today.There was a growing awareness about the state of our seas in the early 1970s, especially amongst scientists and SCUBA divers, who devised Underwater Conservation Year 1977.This event was especially championed by the late Bernard Eaton, together with eminent scientists and public figures including HRH The Prince of Wales, who continues his unwavering support for MCS as our President today. The event gave momentum to form the Underwater Conservation Society, with a single paid project officer (firstly Dr Charles Sheppard then, for many years, Dr Bob Earll). The name “Marine Conservation Society” was officially adopted and registered with the Charity Commission in 1983.Since that time, MCS has achieved major successes in protecting special wildlife, tackling sewage problems, helping the seafood-buying public, and influencing Government and industry.

Bannermans is a bar and venue located in the heart of historic Edinburgh. With live music six nights of the week, featuring the best in local, national and international bands, it’s reputation as one of the busiest venues in town is well deserved. But that’s not all -with over 100 whisky’s to chose from, guest real ales each week, drink promotions every day, hot food served till 10pm, 8 TV’s showing the latest sports, free pool and darts, and more besides, why not come down for yourself and see why so many folk keep coming back…